Project leader Detlev Keijdener of Ballast-Nedam explains how working in BIM during the Definitive Design phase of Kunstenpand “Hart van Zuid” in Rotterdam resulted in an efficient process. “Pand Z”, the working title given to the building designed by De Zwarte Hond, will become the energising heart for art and culture in Rotterdam Zuid. Among other functions, it will accommodate the Zuidplein Theater and a new branch of Rotterdam library. The definitive design was realised in BIM, which initially appeared to be a purely technical tool that needed to be applied with the appropriate precision. In practice, however, BIM proved to benefit greatly from a flexible approach by the parties coordinating the model.

When Ballast-Nedam obtained the PPS contract for Hart van Zuid, the team decided to work entirely in BIM. Pand Z, the energising heart for culture and art, forms an important part of the metamorphosis that the area round Ahoy and Zuidplein is currently undergoing. De Zwarte Hond took on the design and, together with structural engineer Zonneveld, it was also responsible for the coordination of the BIM process from the Definitive Design phase.

Ballast-Nedam had formulated high ambitions for the application of BIM in the “Hart van Zuid” project. In practice, realising these ambitions proved difficult to achieve. Consequently, prior to the Definitive Design phase for Pand Z, all the parties concerned discussed which ambitions for BIM would be pursued, which agreements would be made regarding design protocols, how elements would be coded, and what data would be included. “De Zwarte Hond adopted a flexible and constructive attitude in the discussions”, explained Keijdener. “They listened to the wishes of all the parties involved. Provisions for exceptions were made if certain consultants wanted specific information to be added at a later stage in the BIM-model.”

“The decision to leave certain parts of the process out of BIM worked well for all the parties concerned”, continued Keijdener. This meant that each party could continue to work in their own, most effective way. “If an exception was made, this was discussed in the design team. Then clear agreements were made as to when the parallel process would be added in the BIM model. This avoided surprises. And also, if alterations had to be made to the design drawings, these were submitted to the design team in order to be able to address any objections. The aim in this case was to enable the BIM process to run as smoothly as possible. On the one hand, De Zwarte Hond opted early on for a high degree of detailing while, on the other hand, other matters that were still to be finalised were kept out of the BIM model so that the structural engineer, installer et cetera were not hampered by constant changes in the model. This resulted in a smooth process in which choices were based on common sense and BIM was never a hindrance.”

Keijdener knows from colleagues that BIM is not always accepted with open arms in a design process. It is often the designers who are enthusiastic while the other parties seem to experience difficulties. In the case of Pand Z Keijdener says that all parties recognise the merits of BIM. As well as the meetings for the design teams, Keijdener organised BIM sessions in which all parties, including the client, were present. During these sessions BIM-related problems were discussed and possible solutions sought. This working approach ensured that BIM had added value for everyone. Keijdener: “BIM was suddenly far more tangible for people who had many years of experience in the building industry but had not often worked with this method. A lot of scepticism about BIM was dispelled during the sessions.”

The client also became more involved in BIM during the BIM sessions. “Clients are generally confronted with piles of paperwork. By involving them more closely in the BIM model, they were suddenly able to relate all the information put in front of them to a spatial building. Suddenly they saw the entire scope of specific design decisions. It opened up a whole new world for them.”

One advantage of BIM is that it can easily be transformed into a Virtual Reality environment, an advantage that Keijdener enthusiastically welcomes. “De Zwarte Hond has made huge technological advances with this technique, we can now examine how far we can apply it in the design process, focusing on the client and end user. In the last few months we used the BIM model once for a virtual reality presentation. Several users were anxious about their visibility in the building. By enabling them to experience the building through virtual reality, they could formulate their opinions and give direct feedback of what they saw. This saved a lot of time.” 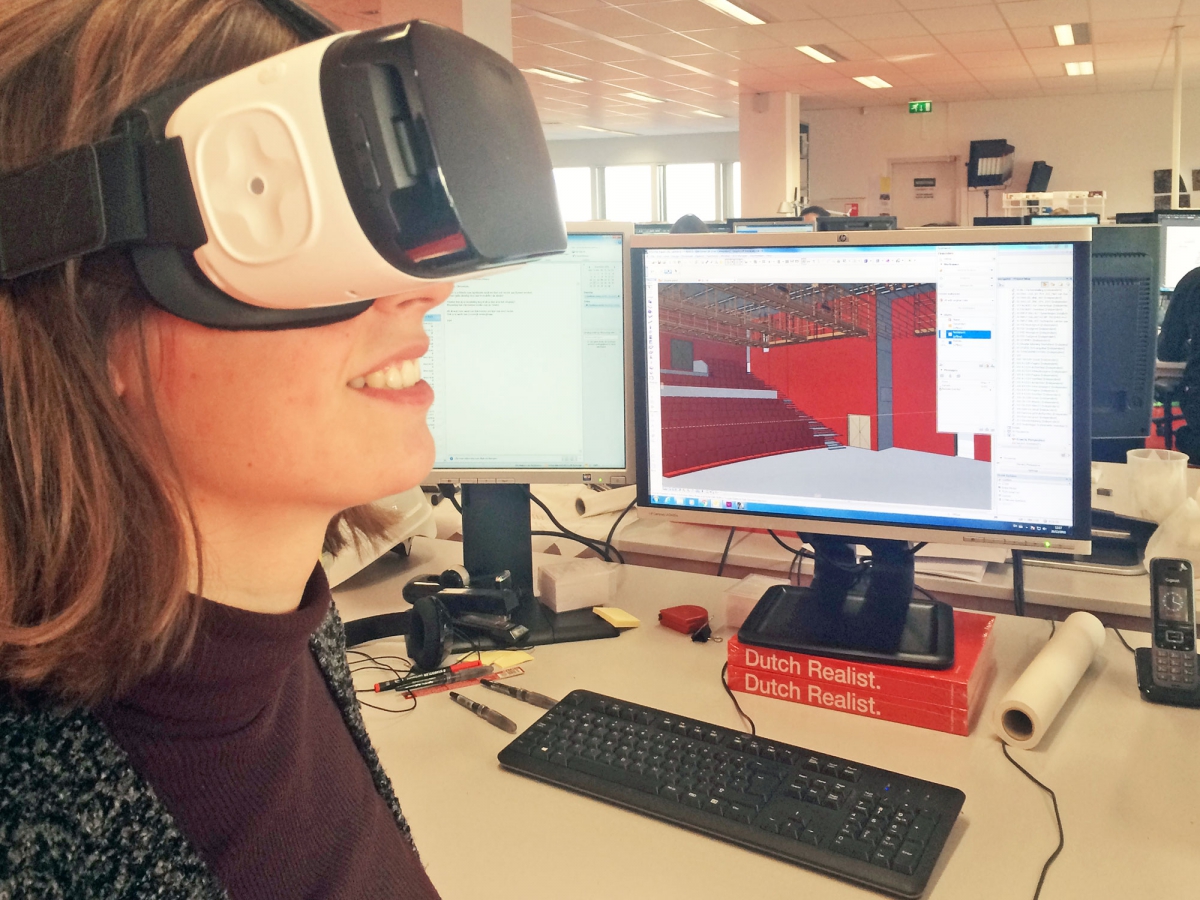