Henk Stadens presented the design for new housing on Kerkplein in Arnhem yesterday. The thirteen unique homes will be situated between St. Eusebius’ church and the future Focus cinema (design by DP6 architectuurstudio). This important city site is one of the city centre developments. The municipality’s aim is to breathe new life into the historic centre through a number of urban interventions and improve its connections with the river.

The volume comprises two hook-shaped building sections with four and five floors, subtly interlocked. The thirteen separate housing units are deliberately unrecognisable as such at first glance. The block’s scale fits in well with the surrounding public buildings on Turfstraat. By stacking the differing vertical rhythms, the block is in keeping with both the horizontally-organised design of the film theatre as well as the city hall and the church. The façades have an open character and, thanks to the depth of the embrasures, the privacy of the occupants in the city centre is guaranteed. The well-lit homes, each with its own layout, will have a spacious vide and a roof terrace. Façade gardens and flower boxes are integrated in the elevation design.

The design was received enthusiastically during the meeting. Given that the project has already been approved by the municipality of Arnhem and Kwaliteitsteam Zuidelijke Binnenstad, the authority responsible for quality control in this part of the city centre, construction will probably commence in the third quarter of this year in which case it will reach completion in 2018. 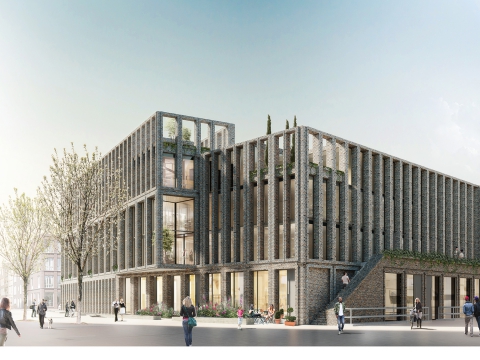