The demolition work in the Gooise Meren town hall in Bussum has commenced. From mid 2017 all the officials of the new municipality, in which Bussum, Naarden and Muiden have been merged, will work in the renovated town hall. A building dating back to the sixties and designed by Cornelis Wegener Sleeswijk. The new town hall has a completely different set of requirements regarding its new premises than fifty years ago. Gooise Meren would like a welcoming, open building that facilitates cooperation between politicians, officials and inhabitants. An easy-access, comfortable “municipal foyer“ for everyone, with plenty of space in particular for formal and informal dialogue.

The short, former administration wing will have a public character comprising an integral, central entrance, a reception and consultation area and also a restaurant. Transparency and “see and be seen” is the adage here. The officials work in a flexible working environment in the long wing. Here, in addition to standard workstations, concentration and flexible work places will be created, but also informal meeting rooms and rooms that are closed off. The council chamber on the pivot of both wings remains largely intact, but has a new, flexible layout so that it is multi-functional.

As regards materials, wherever possible De Zwarte Hond has sought inspiration in the qualities of the existing building. The stone floor on the ground floor is one example of this. The attractive texture, the unusual bond and the warm colour combination are being preserved and have determined the other materials. The same applies to the wooden panelling in stairwells and the council chamber.

In addition to the modifications in the building’s interior, access and sustainability are being increased. The window frames, the glass, the installations and the insulation value are being improved as a result of which the energy performance of the building complies with present-day requirements. After the renovation the 55-year-old building will once again be ready for the future. 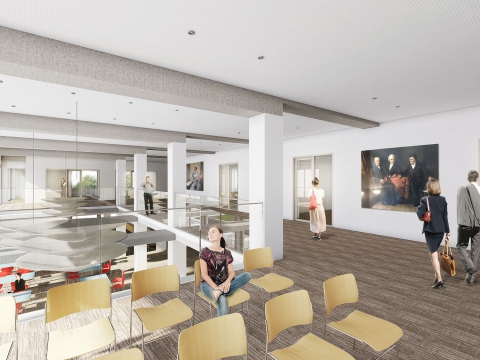