Meeting the Designers of Tomorrow

De Zwarte Hond believes it is important to be visible to future employees and is happy to share its professional knowledge and passion with students. For these reasons, we maintain annual contacts with students in higher education. These contacts reveal the fresh motivations of architects and urban planners. On the other side, the students get an idea of ​​what De Zwarte Hond can mean for their professional development.

In May, De Zwarte Hond gave several lectures and workshops for colleges and universities.

A business day was held at Windesheim University of Applied Sciences, organised by the student association Nervi. During the day students could find out about the architecture profession, and ask questions about how things work in a bureau and during the typical working day and week.  Joren Moorman and Martijn Korendijk represented De Zwarte Hond. They answered questions from students about a possible office internship. In addition, they gave short presentations to small groups about the agency, and the projects and themes that De Zwarte Hond believes to be important.

Kjai Tjokrokoesomo gave an interactive lecture for Eindhoven University of Technology about Swipocracy and the densification of the Haarlemmermeer. During his lecture, he described how you can convert a local council used to expansion to densification. Of course, you first have to get people excited about it, so he discussed that too. Swipocracy provided the platform to enter into dialogue with each other. The images and texts that De Zwarte Hond created for this made it a big success. Lively discussions and reactions followed the lecture.

Architect and partner Henk Stadens gave a lecture at Hanze University of Applied Sciences on the theme of How to keep Groningen city centre economically healthy. The starting point for this was the transformation/project on Rodeweeshuisstraat. Henk went deeply into the process of transforming and developing the place, with an eye on the four different target groups. He also discussed the time span of the project and the consequences of the project delays.

The Career Day of the University of Groningen (RUG) also took place in May. Bart van Leeuwen and Aroosha Zahid devised an interactive workshop for the day, based on a number of projects. There was also an opportunity for students to get in touch with Aroosha and Bart for informal questions on a one-to-one basis. The students were so enthusiastic that we may see some of them in the office as interns during the next academic year. So, a successful day! 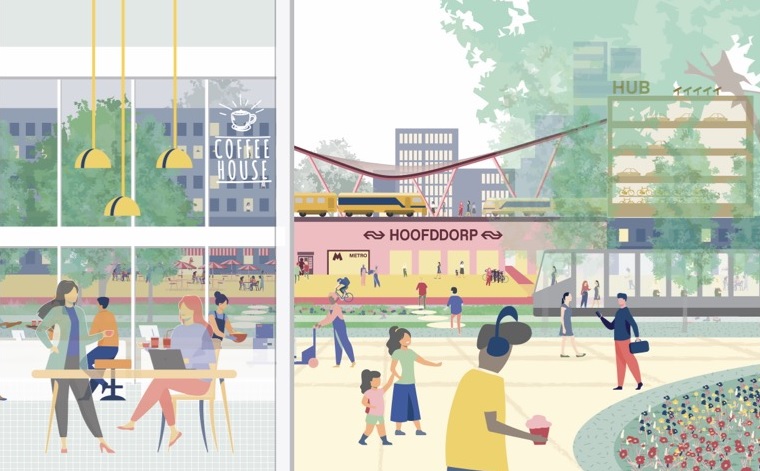