Thanks to the expertise accumulated over the years, De Zwarte Hond gets invited increasingly often to bid for commissions related to the development of regional visions, the design of school buildings, and the design or renovation of buildings housing municipal services. The following highlights a few examples of architect selections in which we have recently been successful.

Zeist, Den Dolder Northeast zoning plan
De Zwarte Hond was selected by the municipality of Zeist to develop the vision for the Willem Arntsz-Hoeve, Den Dolder. The site has been in institutional use for over a century, and in addition to many objects of cultural and historical value comprises a number of more recent buildings as well as prime parkland. The changes in the housing and healthcare markets have also affected the requirements and prerequisites of the parties occupying the site. A new and clear vision for the area was needed to provide a solution for the future. The municipality of Zeist was looking for an interactive process in which all the interested parties would be afforded the appropriate means to provide input concerning the future use of the area.

De Zwarte Hond developed a model, the option matrix, to help streamline the communication for this complex process. The model provides a means of collecting and arranging all the possible subjects for analysis and visualisation by the stakeholders. Meetings, round-table talks and workshops are then used to create the building blocks for developing the zoning plan for the area.

The role of De Zwarte Hond is to be facilitator and moderator, while the municipality of Zeist is responsible for the process. The various design stages and the choices to be made as part of the process are shared with the parties involved and presented as visually as possible in order to achieve the best possible result.

The zoning plan is scheduled for completion in the first half of 2016.

Scherpenzeel, new primary school
The town of Scherpenzeel has named De Zwarte Hond as the winner of the architect selection contest for the design of a new building for the De Glashorst primary school. The new school building will occupy the same site as the current building and will provide room for 237 pupils. The brief calls for a functional, sustainable and challenging building suitable for intensive use and radiating an atmosphere of warmth, cosiness and security. The school will feature a healthy interior climate and low energy demand. It will be a compact volume with a landmark sculpture at the corner of Glashorst and Prinses Marijkelaan. The interior will be spacious with lots of daylight and dimensions in tune with the children inside.

The new school is scheduled for completion in September 2017.

Bussum, town hall redevelopment
De Zwarte Hond has been awarded the contract to redevelop the town hall of the newly formed municipality of Gooise Meren, the result of a merger of the current municipalities of Naarden, Muiden and Bussum, which is to take place on 1 January 2016. The existing town hall of Bussum has been selected to house the municipal offices after the merger, so this building, once redeveloped, will become the administrative centre of the new municipality.

In the vision proposed by De Zwarte Hond the urban design context as well as the facade and the interior of the existing building require attention. The structure of the building designed by Cornelis Wegener Sleeswijk in the 1960s offers plenty of scope for representing a new and vigorous municipality, but the threadbare and dysfunctional interior is in dire need of replacement. In addition the energy performance of the building will be raised to modern standards by improving the outside door and window frames, the glazing, the climate systems and the thermal insulation values.

The changes in and around the building are based in particular on the municipality’s desire to increase the participation of the residents of Gooise Meren. This calls for an accessible and comfortable building providing ample room for the exchange of views, both formal and informal. It will be a building with a low threshold, acting as an urban foyer for residents as well as politicians and administrative staff.

The town hall of Gooise Meren is scheduled for completion on 1 January 2017. 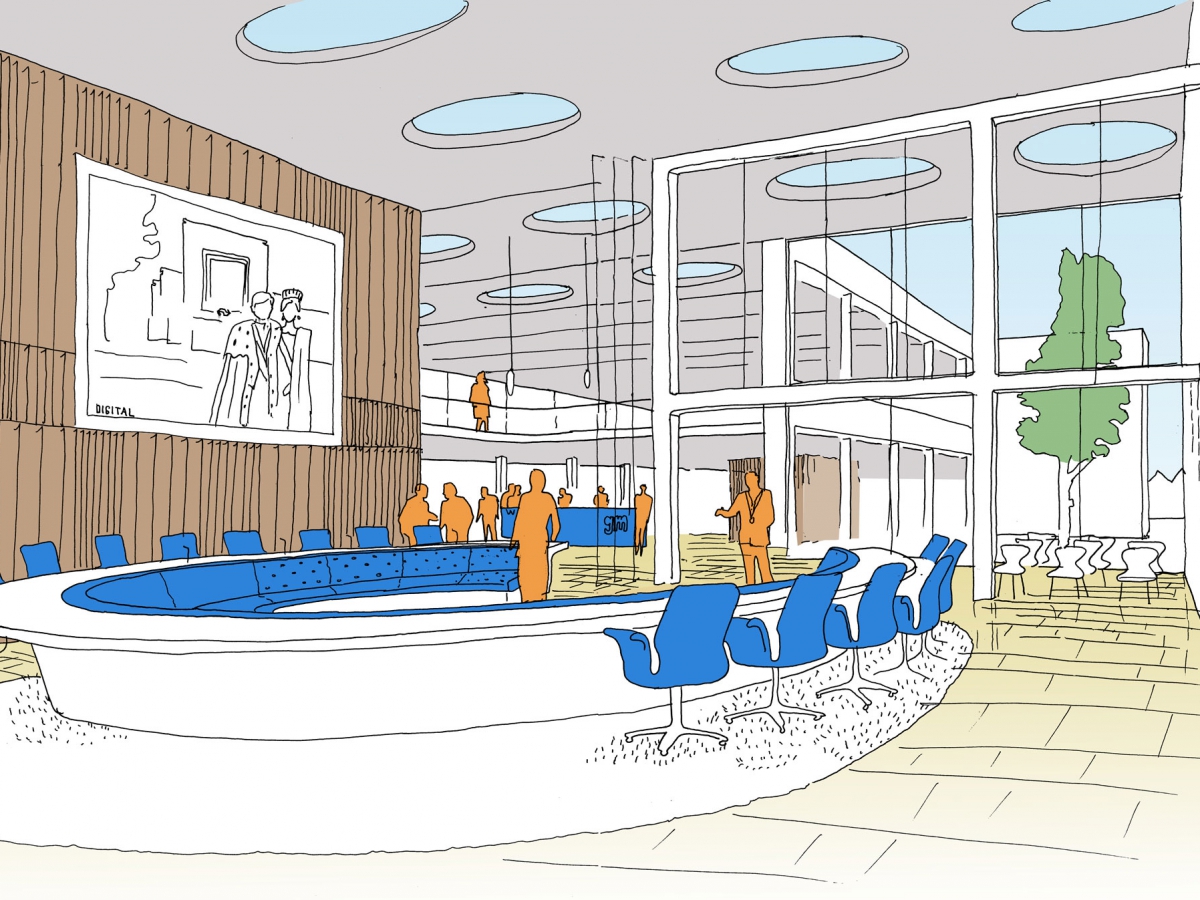