Stewardship as basis for a dynamic and healthy landscape

The municipality of Bladel in Noord-Brabant commissioned De Zwarte Hond to create a strategic plan for a new co-living concept at De Egyptische Poort. Located in the neighbourhood of Egypte, this 10-hectare site forms the transition between the village of Bladel and the rural surrounds. In collaboration with Felixx Landscape Architects & Planners and InVra Plus we proposed a concept entitled De Egyptische Coöperatie (The Egyptian Cooperative), that builds on the strong sense of community in Bladel.

The principles of stewardship form the basis of the concept, whereby people are caretakers of nature as opposed to its owners. The residents of De Egyptische Coöperatie live responsibly in the landscape. This doesn’t mean that the landscape lacks a function - on the contrary, the landscape is used for food and energy production and for growing natural materials to be used by the community, for example for furniture-making. The basic principle involves giving back what’s been taken; so for residents this means not only harvesting but also sowing seeds for the future.

Building on the Egyptische Poort Masterplan, the current landscape will be enhanced by extending the existing green network. Inspired by the historic landscape structure, the concept proposes Landscape Rooms 2.0 which comprises four elements: the landscape rooms, the productive landscape, a green spine and an intricate network of routes.

Stewardship also applies at the building scale. Residents are responsible for passing on the landscape to the next generation in a responsible manner. This means that the dwellings are, so to speak, guests in the landscape. To that end, the plan draws inspiration from the characteristic local farmhouses which are traditionally built freestanding in the landscape or clustered around a shared space. A special feature in the plan is the central ‘Ribbon’ that offers a safe living environment for elderly residents and people with dementia who need assistance. 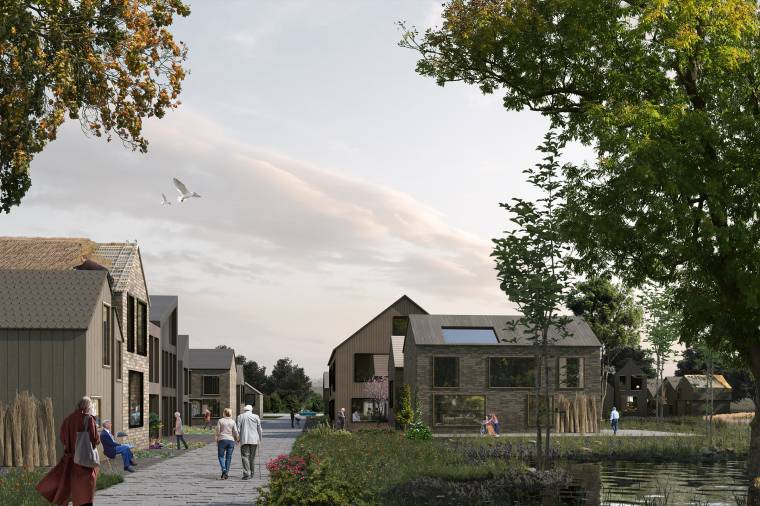