Utopia in the Leidsche Rijn in Utrecht

De Zwarte Hond, together with Faro, has created a design for a sustainable and inclusive ‘Familistère’ in the Leidsche Rijn Centrum district of Utrecht. An agreement about the realisation has just been reached between SBB Ontwikkelen ing en Bouwen (Smit’s Bouwbedrijf) and Coltavast with the City of Utrecht. The Familistère is a nod to the ideas of the French industrialist Godin, who in the 19th century had a monumental housing complex built for all his factory employees. In the Leidsche Rijn too, the Familistère will be a place where residents can work, live and spend their free time together.

Urban identities
Kavel I5 in Leidsche Rijn Centrum, where the Familistère will be built, has two urban identities: a spatial identity with views of a park and a square, and a more intimate identity of city blocks on the north and east sides. Each of the individual building blocks relates in its own way to the streets and character of the adjacent neighbourhoods. On the spatial side, higher building volumes will be constructed that will connect strongly to the park and the square. On the intimate side, the lower volumes are in line with the smaller grain of the surrounding urban blocks. Due to its clear coherence, the Familistère forms one large urban block on the park side. The Familistère is a building block consisting of four buildings with 122 homes, 60 underground parking spaces, 525 bicycle parking spaces and 300 m² of facilities.

Collective living
The design by De Zwarte Hond and Faro is inspired by the monumental 19th-century Familistère in Guise, France, by the French industrialist Jean-Baptiste André Godin. This Familistère housed everyone who worked in Godin’s factory, directors and workers. Godin was against class division, and within this “Palais Social” all workers were equal. The building, which consisted of 558 apartments and 350 maisonettes, had a central courtyard under a glass roof. The residents lived, certainly by the standards of that time, a comfortable and even luxurious life, with running water, heating and toilets. Godin thus realised a 19th-century utopia where residents worked, lived, socialised and worked on self-development together.

As a whole, the of De Zwarte Hond and Faro’s block fits within the urban development envelope. Compartmentalisation in the different buildings means that all four buildings is  unique. For example, they are distinguished by differences in rhythm, plinth appearance, use of colour and plasticity. The detailing of the piers, the dimensions of the façade rhythm, the overall design and the materialisation give each of the four buildings a distinct appearance, ensuring diversity. Each one has its own spacious main entrance and access, and they are separated from each other by a straight line. The coherence of the entire block is guaranteed by the continuous plinth, which has the same height everywhere.

Bundled functions
Within the residential block, housing needs are bundled and multiple functions are brought together in one place. For example, and just as Godin intended, there is a central courtyard under a glass roof: the atrium. This is not only a place to come together, but also a space for greenery, for relaxation and exercise. It contributes to circularity by limiting energy consumption, and adds to the living comfort of residents throughout the year.

Housing typologies
The homes are strongly oriented towards the street. All feature a generous outdoor space and a lot of glass. There is a great variety of typologies. There are homes on the ground floor with their own entrance and their own workplace on the street, there are duplexes spread over two floors and there are apartments with a modest footprint. Due to this variety of typologies, the complex is attractive to different users and can also meet the needs of young couples, starters, single parents and the elderly.

Sustainable residential building
A concrete shell is used for the residential building, which has been set up in such a way that maximum flexibility is guaranteed in the future. This makes it easy to adjust house sizes. The shell is future-proof and can last at least 300 years. This also applies to exterior façades that can last 200 years and interior façades that can last 50 years. The use of flexible skirting boards makes it possible to change functions in the future. Circular elements that are included in the materials passport are used for the construction and finishing. This also applies to the inner façades of the atrium and the cross-layer timber construction of the maisonettes on the roof. The use of a glass roof creates an atrium that brings the four buildings together and thus forms a collective place for residents. The atrium promotes social sustainability because different groups of residents can come into contact with each other here. The atrium will be a pleasant green place to spend time and meet others, with vegetable gardens and cupboards with books and games to share. The green roof and the atrium offer a solution against heat stress and flooding and also contribute to biodiversity. Water is stored on the roof to provide the atrium plants with watering in the summer. Bicycle parking spaces at ground level will stimulate the use of bicycles. 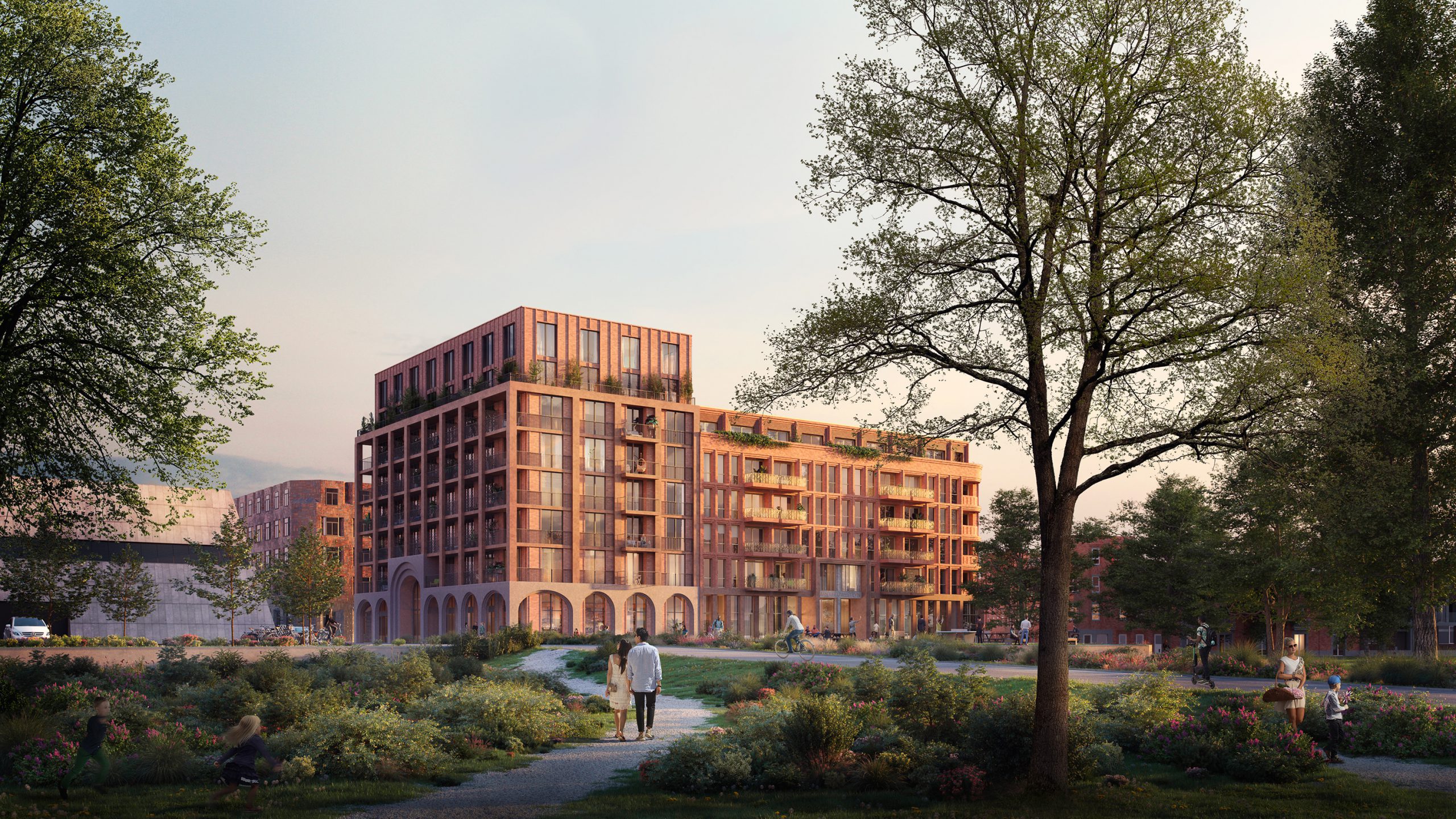