Vision for the Stadsblokken-Meinerswijk area in Arnhem

Together with Buro Harro, De Zwarte Hond is starting work on the elaboration of the vision for the Stadsblokken-Meinerswijk area in Arnhem. In November 2016, following a referendum, the citizens of Arnhem gave their approval for the area on the south bank of the Rhine to be taken in hand. The run down parts of the area will be transformed while the better, more interesting parts will be reinforced. By far the greater area will remain a nature park, although some of it will be excavated to allow for a bypass in the Rhine. The zone along the bank, an area where a shipyard and brickworks once stood, will be improved. Living in green surroundings, recreation, a beach and a marina with different forms of public programmes will be created here.

The area covered by the plan has an interesting and eventful history. In 2003 a floriade (an international garden exhibition) was envisaged for the area but this was abandoned in 2004. Later, large parts were purchased by Phanos, the real estate company which collapsed in the crisis. Phanos commissioned an ambitious plan by a Luxembourg architect and, following the bankruptcy, Buro Harro created a far more modest plan, first on its own initiative and later commissioned by the executor. This plan formed the basis for a detailed framework formulated by the local council, which in turn led to a referendum resulting in 64% voting in favour of the plan.

De Zwarte Hond and Buro Harro will elaborate this framework into an urban development and landscaping plan commissioned by KondorWessels Projecten. 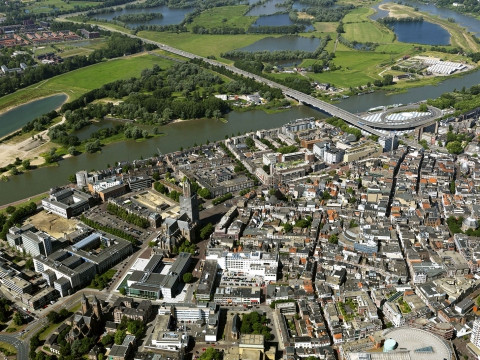